Luminous Leadership In The Dark Days of the della Scala Family 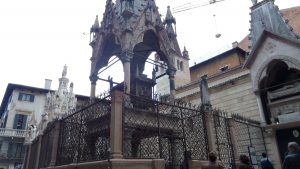 I first heard about the della Scalas, or Scaliger family as they are sometimes known, on a trip Verona almost five years ago. Our guide had stopped outside a group of ornate, if not over the top, Gothic tombs and started telling us snippets of the della Scala story.  Immediately after, we entered the small family church that resonated with centuries of history. As I sat there,  I played around with the idea of coming to Verona to do some research for a history masters. It would be on the of the subject the della Scala family, of course.

Years later, I ended up doing a business psychology masters, not history. However, my interest in the family has not waned.  I have spent many hours researching their story and walking in their footsteps on the Veronese streets. Rather than a history degree, I have woven a whole leadership programme around these fascinating characters. So, who are they?

Many of you will have heard of the Borgias and their twisted history. The della Scala family has a similarly dark story. Of course, times were hard and bloody in those days. Feuds and warring factions were the norm. Italy was far from united as it was today. The head of the della Scala family, or at least the first to make it into the history books, was Mastino della Scala who rescued Verona from the tyrant Ezzelino da Romano. One book, The Story of Verona (Wiel, 1910) says of Ezzalino: “When he captured the population of Friola he caused the population, their eyes, noses and legs, to be cast forth to the mercy of the elements. On another occasion he walled up a family of princes in a castle and left them to die of famine.” When Mastino rose up against the tyrant, it is not surprising that he was given the title “Captain of the People” by the Veronese. He became their ruler. 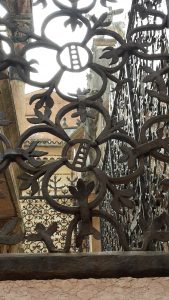 The ladder motif of the della scala family

However, their love for him wore of and he wasn’t re-elected. Instead, he took control of Verona by force, until he was killed by a faction of nobles. This sets the scene for rival feuds, sieges, poisonings and even fratricide on more than one occasion.  However, there are still many upsides to the reign of the della Scala famiy. Cangrande della Scala conquered the provinces of Padua and Vicenza and united the regions. He also opened his home to artists and figures such as Giotto, Petrach and Dante. The latter of which was now on the run.  Unfortunately, Cangrande fell to an untimely death, around the age of 38. Rumours followed it for centuries. It was only recently when Cangrande’s tomb opened and his mummified body autopsied, that it was established that he died from digitalis poisoning. Cangrande II, in comparison, was a tyrant who used German mercenaries to keep martial law. They, however, were not able to protect him from his brother Consignorio, who murdered him. Consignorio did at least leave a beautiful legacy in the form of the many palaces and bridges that still adorn Verona today.

And yet there is a figure that shines out throughout the darkness. That is Beatrice della Scala. She was the daughter of Mastino II, who was nephew to Cangrande. Beatrice was married off to the Milanese Barbaro Visconti to create an alliance. Her husband, Barbaro, was a cruel man and known for his mad rages. Yet Beatrice was somehow able to calm him and act as intermediary between himself and other rulers. With Bernabo as Lord of Milan, Beatrice became “Lady of Milan,” but was often called “Regina” by the people. She reportedly governed well and put her own money into reviving areas that had been destroyed or harmed by the warring factions and families. However Beatrice was no pushover. When her own family tried to deceive her of her inheritance, she raised an army to claim it back. She only stepped down when a monetary agreement had been met.

Beatrice is a luminous example of Scarlet Thinking. She was tactical, working out that she had to manage her her husband for everyone’s benefit. Beatrice was ethical, as we can see by her development work and charitable projects. She knew the value of social capital, understanding that relationships with other rules needed to be cultivated. She was also concerned about legacy and build the Chiesa Santa Maria In Milan. It’s now long gone, but the famous Milan opera house, la Scala, stands on that spot, bearing her name. This is a legacy she couldn’t even have begun to imagine.

Inspired by this family, I have built my whole leadership programme around the history of this era: a fascinating time of itself as it is when Medieval is slowly transforming into the Renaissance.

The della Scala leadership programme deals very firmly with modern approaches to leadership, such as host leadership, but uses this family dynasty to illustrate leadership from the perspective of legacy. How do we want to be remembered? What do people want to leave to their team, their organisation and the wider community?

It is an immersive programme. No plastic chairs in stuffy boardrooms. No power point or photo-copied handouts.  Instead, we walk the streets of Verona, and ourselves become part of the della Scala story.